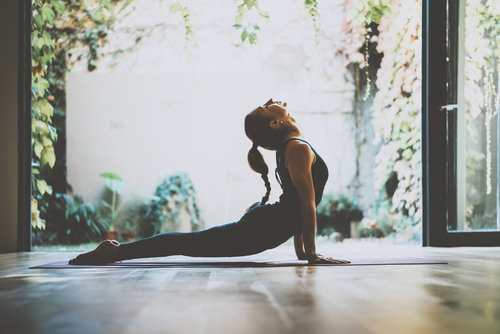 The popularity of Yoga started out in the west, mostly as something the hippies did for spiritual enlightenment. However, today it stands out as one of the most mainstream and respected fitness practices among personal trainers and fitness experts.

One of the most unique or perhaps fascinating characteristics of Yoga is that it’s one of the few physical activities that do a pretty thorough job of connecting your brain to your body. Here is more about the positive relationship yoga reflects with mental well-being.

Alters Chemicals In The Brain

The overall consensus is that Yoga enhances mental-wellbeing and similar positive physiological outcomes mainly due to the chemical changes it brings to the brain. Yoga facilitates a greater release of gamma-Aminobutyric acid (GABA) from the thalamus. GABA is a neurotransmitter that acts as a sort of “grand inhibitor” of the brain that suppresses neural activity.

A high release of GABA can mimic the effects of anti-anxiety drugs and alcohol, which relaxes and rests your brain to a calmer and more collected state, giving the right mental well being to deal with everyday stress.

A Powerful Impact On Mental Patterns

It’s quite well-known that the most important equipment you need for a yoga class is your body and your mind. Only when a proper connection is achieved between them a yoga session will prove effective. This also means that unlike when you go for a run or lift weights, in Yoga you will feel the full effect only when both your mind and body are in complete sync.

This connection is believed to have a powerful impact on your mental health, and some therapists and doctors have begun to prescribe it as a complementary treatment on top of medication, talk therapy, or both. In some other cases, Yoga is recommended as the only method of treatment to combat many unhealthy mental patterns.

This has been slightly proven according to a 2007 study on depressed patients which observed that participants who engaged in regular yoga practices at least three times a week for two months experienced significantly fewer symptoms of depression, anxiety, and neuroticism. Some also achieved remission from mental illness and reported improved mood overall.

Another crucial way how yoga enhances mental-well being is through the release of “feel good” hormones; dopamine, serotonin, and norepinephrine. Although it may seem like Yoga movements are slow and controlled, they can still elevate heart rate and make your muscles work harder to stimulate the release of these hormones. As a result, these feel good or happy hormones can relax your mind, calm you down, and make you happy, thereby enhancing mental well-being.

A 2010 Harvard study reported that 47% of people spend time worrying about things that aren’t happening, and tend to be less happy because of it. As yoga classes are centred on breathing and keeping your mind in the present moment, your mind stops worrying and wandering over the unpredictable future, reducing the release of stress hormones (Cortisol).

In addition to that, deep diaphragmatic breathing initiates your parasympathetic nervous system, shutting down the stress response by lowering cortisol (stress hormones), blood pressure, and heart rate and in parallel increasing the release of happy hormones, thereby enhancing mental-well being.